Hello! Sorry that it has been a while since I posted, life has been busy and blogging had to go on the back burner. However, being at YALC has refreshed my love of blogging and I have been inspired to sort my schedule out and get some writing done. It was a busy weekend, but I’ll try not to make this post TOO long!

I went to YALC for all 3 days again this year. This was my second visit to YALC, with my first vising being 2 years ago in 2017. I was able to meet up with my blogging gang, who I haven’t seen in person for the last 2 years. This meant I was REALLY excited to get in the queue on Friday.

Queuing was a slightly stressful experience as it appeared that members of staff were not sure where we should be queuing. They tried to separate us into 3 lines: Extra help, 3 day passes and 1 day passes. This didn’t really work when they opened the doors however as it caused a massive crush of people at the doors. Not ideal at all!

It was lovely to wander around stalls and get a feel for what there was, what books were available and to see how giveaways and getting ARCs was being run. There was some rushing at the initial part of the day as there were some eagerly anticipated books up for grabs. I however just went for Virtual Queuing tickets and a wander. This was another issue as VQ was announced on Twitter very shortly before YALC started so quite a lot of people didn’t know about it, and it was never explained to us how it would work. Luckily I picked up my tickets first thing on Friday morning, thanks to one of my friends mentioning they were getting theirs. It would have been a long wait otherwise!

I didn’t bring many books with me to get signed this year as I refused to buy any books specifically for YALC (like I did in 2017). Instead, I only took books I already owned. This meant I took barely any books as in the first half of this year, I have bought hardly any books as I physically haven’t had the time to buy or research new books!

Beth and I went to the Myths and Legends panel with Ben Aaronovitch, Renee Ahdieh, K.K. Perez and Mary Watson which was REALLY interesting, despite the really uncomfortable chairs! I then headed over to get my copy of Lies Sleeping signed by Ben Aaronovitch, who was lovely.

It was then a day for buying books, in fact, Friday was the only day that I bought books.

I bought Red, White and Royal Blue first. I’ve been meaning to read it for a while and Amy insisted that it was good so I just HAD to get in. I was then able to pick up a proof of Song of the Crimson Flower.

Perfectly Preventable Deaths was recommended by the rest of the gang so I knew I needed to pick it up and Hot Key had an offer on if you bought 3 books so I had to pick up Lorali and Step Sister at the same time to make it worth it. 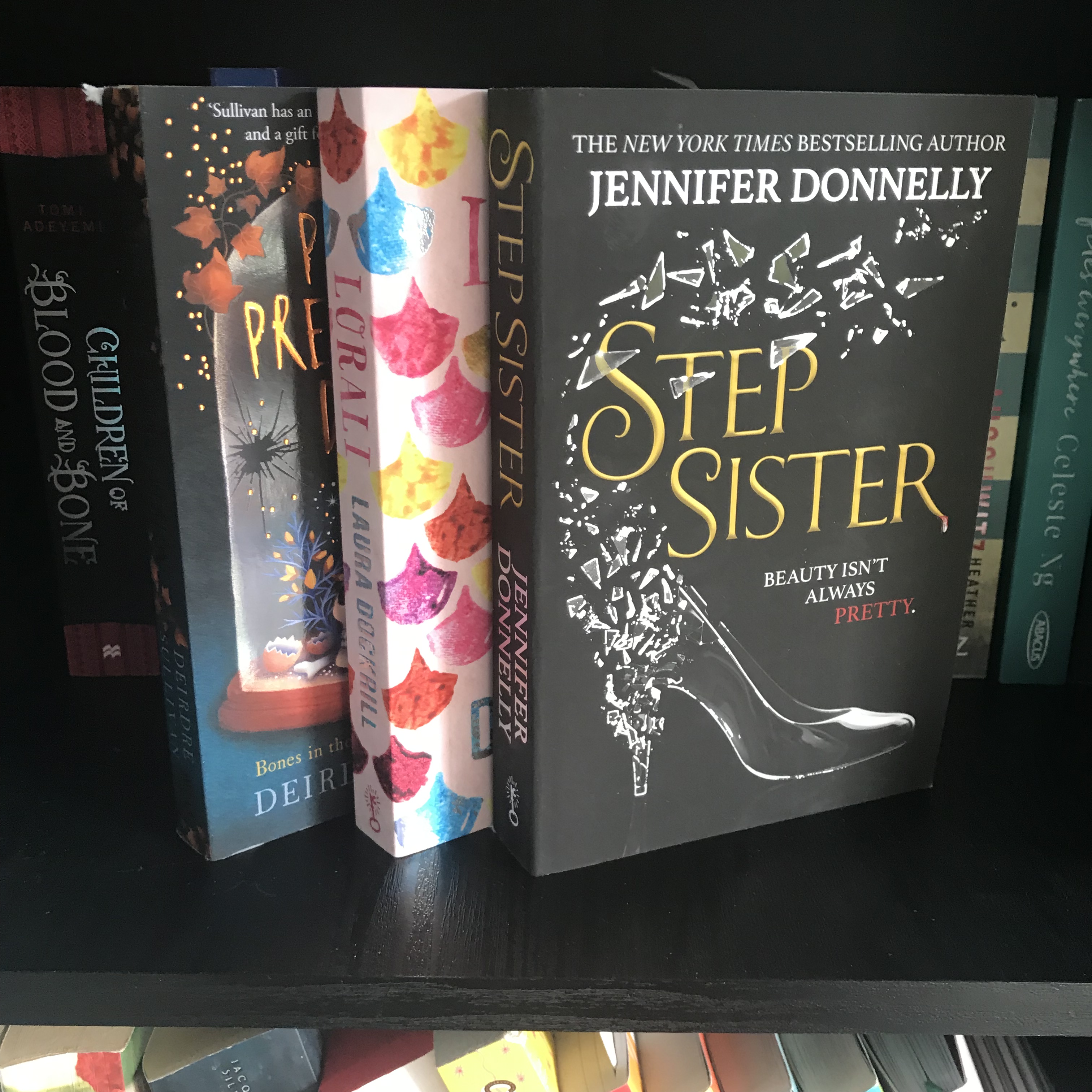 I then spotted the Signed, First Edition of The Lady’s Guide to Petticoats and Piracy and GASPED. I’ve been waiting for this book since I read AGGTVAV about 2 years ago and to get a signed hardcover is just so exciting. I couldn’t stop looking at it and holding it. 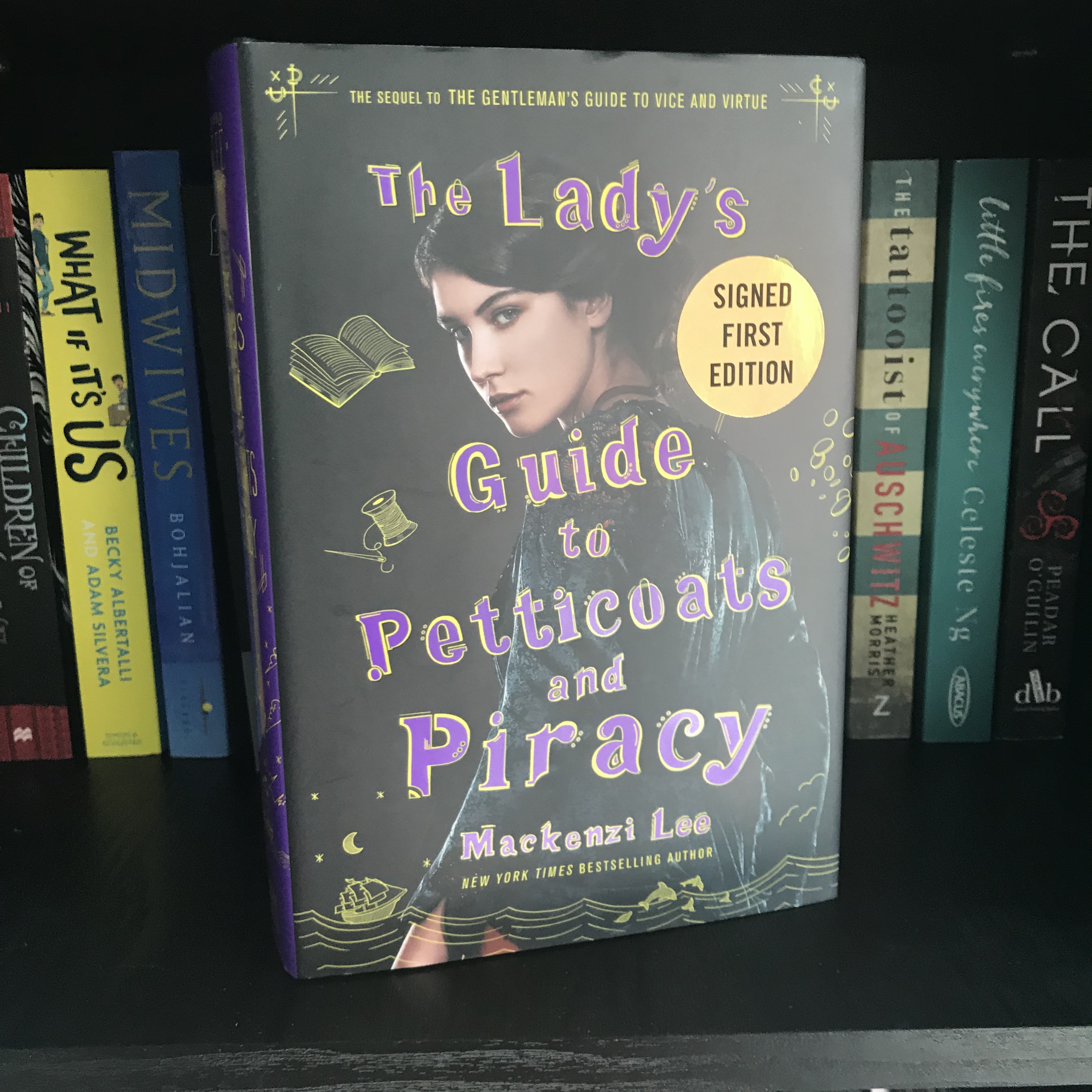 I then bought my last 4 books in a bundle from Josie Jaffrey as Imi was stood by her stall as I walked past and gave me a gushing review of the series and recommended it very highly. I trust Imi’s opinion so knew I had to pick up the books! 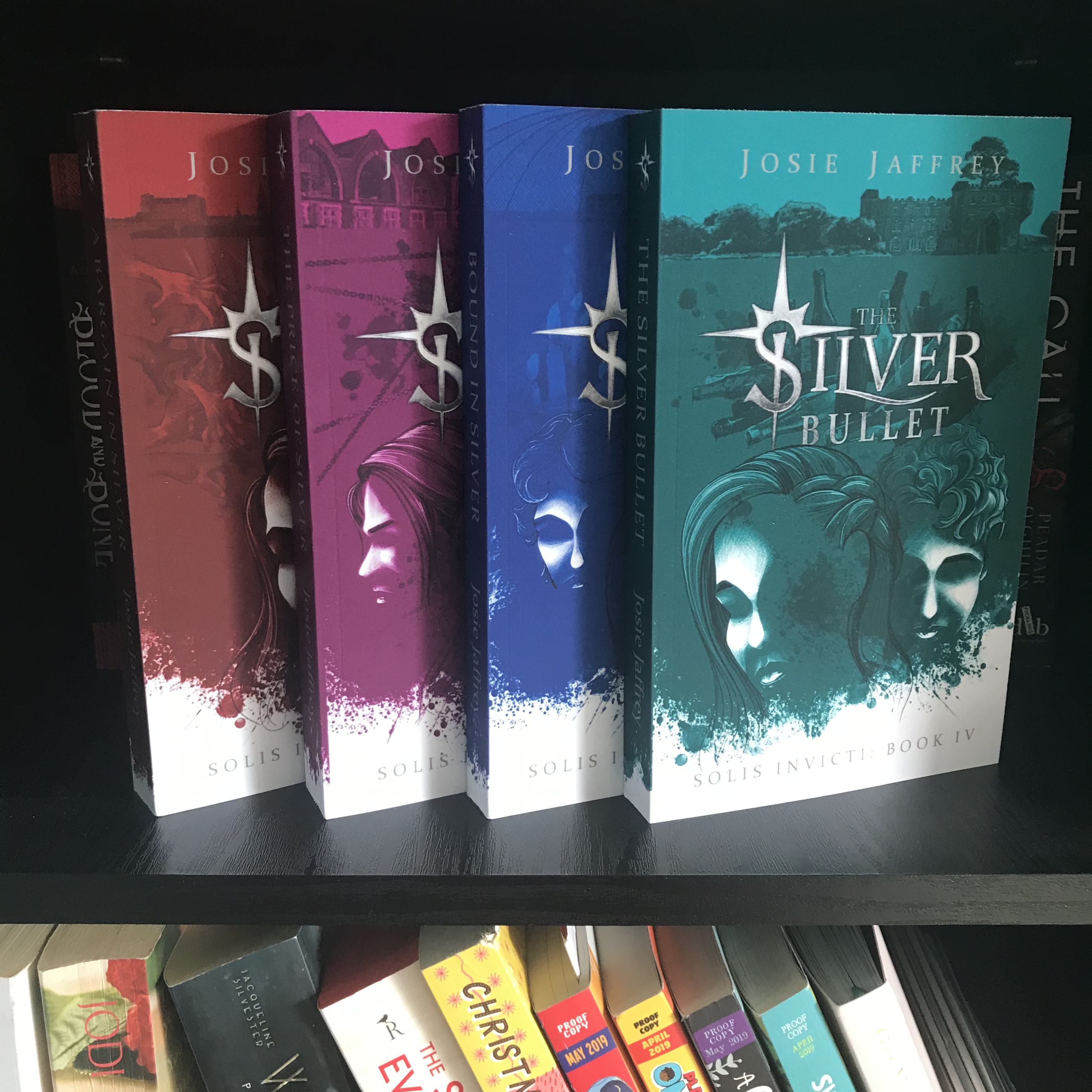 I also won the raffle for Are You Watching? by Vincent Ralph from Penguin on Friday as well. I’m looking forward to starting it.

It was encouraging to see that nearly every publisher was doing raffles or a more gentle competition for their books. Most of them didn’t do a first come, first served basis which is a huge improvement from last year and any competitions they did do, did not involve lots of dancing or singing or doing anything silly or embarrassing.

We also watched Imi and Beth in their Blogging tips panel. They were fantastic and I got some useful nuggets of information!

Later on in the day we sat and watched the UKYA Blogger Awards which was just lovely to see. Well done to those who won, were long and short listed. You all deserved it!

We knew Saturday was going to be busier, and it was encouraging when we arrived to see staff who clearly knew what they were doing. We were carefully put into queues and everything seemed to be going well. They even let us inside from the rain early so we could wait inside. This is where is all went wrong. Really wrong. We went from a carefully ordered queue into a mass group by the lifts. Some YALC attendees became unpleasant during this period  and respect began to go out of the window. YALC staff should have kept us in our line, rather than allowing us to form a mass group and this feedback will be passed on. When the lifts opened, it became a free for all. People were desperately rushing to get an ARC of Infinity Son, which I was lucky enough to get a copy of. But it shouldn’t have been first come, first served. This caused a rush and wasn’t safe. 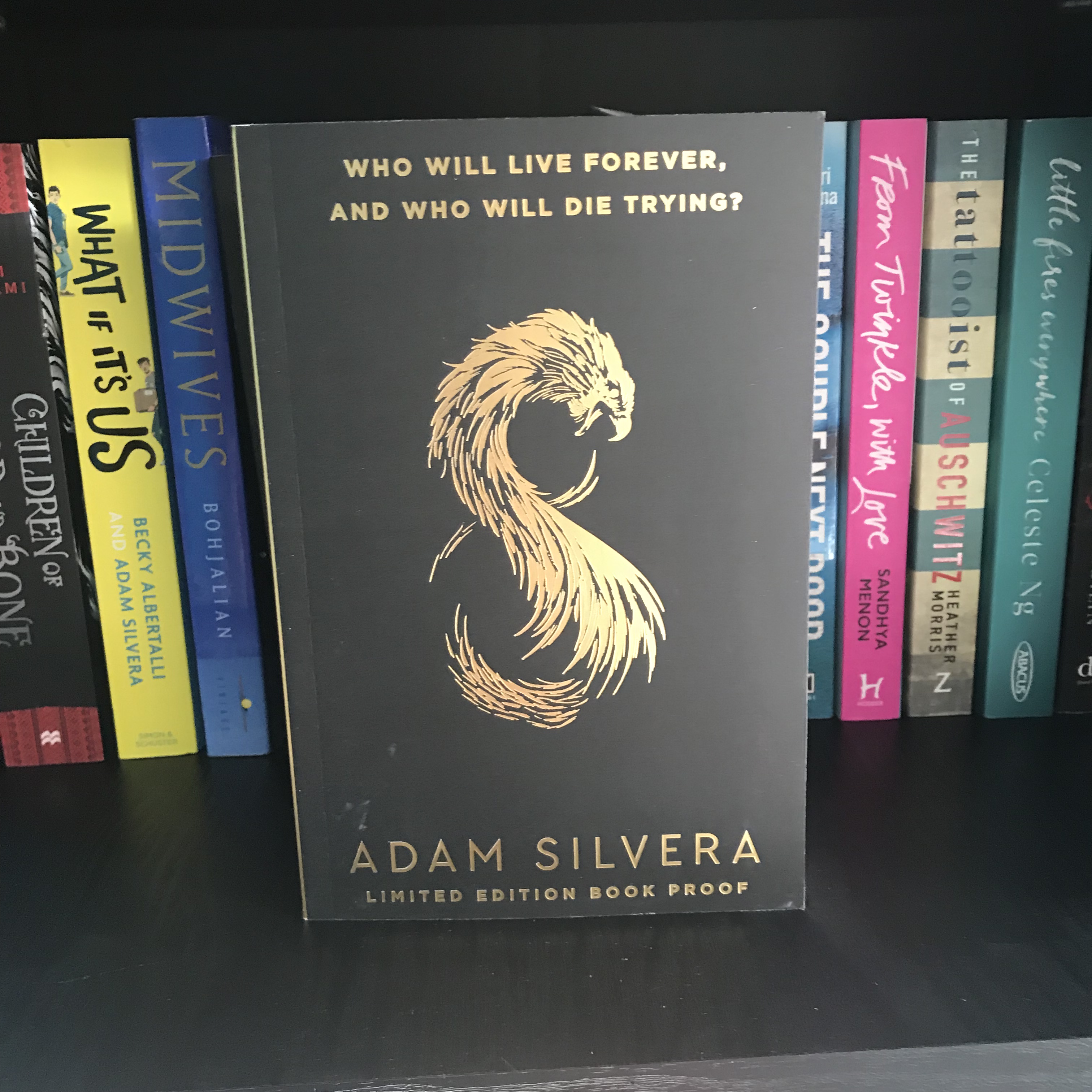 People were also rushing to get VQ tickets as it was well known now that this process was in place, and there were some big names signing on Saturday and YALC staff were NOT prepared. It was sheer carnage, that’s the only way to describe it. I do have to take the time to shout out one member of staff in particular, Megan. She was incredible for the whole day. She took time to look after attendees and try and keep order in the madness. She clearly understood the process for people who had Extra Help bands and tried to keep everyone safe and happy. This was certainly not an easy task and things were not well organised at all. The positive is, once VQ was set up and sorted, it saved queuing for ages for authors and meant we could wander off and sit down / wander for a while whilst waiting for our numbers in the lines.

Saturday was hot, it was crowded and people were not always being respectful. That said it was lovely to watch the Mystical YA panel with Melinda Salisbury, Sarah Maria Griffin, V.E.Schwab, Vic James, Yaba Badoe and Zen Cho. These women are a force to be reckoned with and this panel was powerful and incredible. I could have listened to them speaking all day.

It was then time to get my book signed by Sarah Maria Griffin and have a tarot card read. I hadn’t read Other Words for Smoke prior to YALC, but thanks to Luchia for giving me a copy and Becky and Lauren for informing me about how incredible Sarah is, I am now a huge fan. It was so delightful to see my friends with Sarah and I can’t sum it all up in my posts. All I’ll say is go and check out Twitter for some amazing photos of Sarah receiving her Furby. It is moments like this that YALC is all about, and it was just incredible to see.

I also got my book signed by Dhonielle Clayton and Jim Kay. It was a pleasure to meet them both, they were so wonderful to meet and were more than happy to have a small conversation whilst signing books.

I also won a copy of To Best the Boys from Fairyloot and I am very excited to read it. 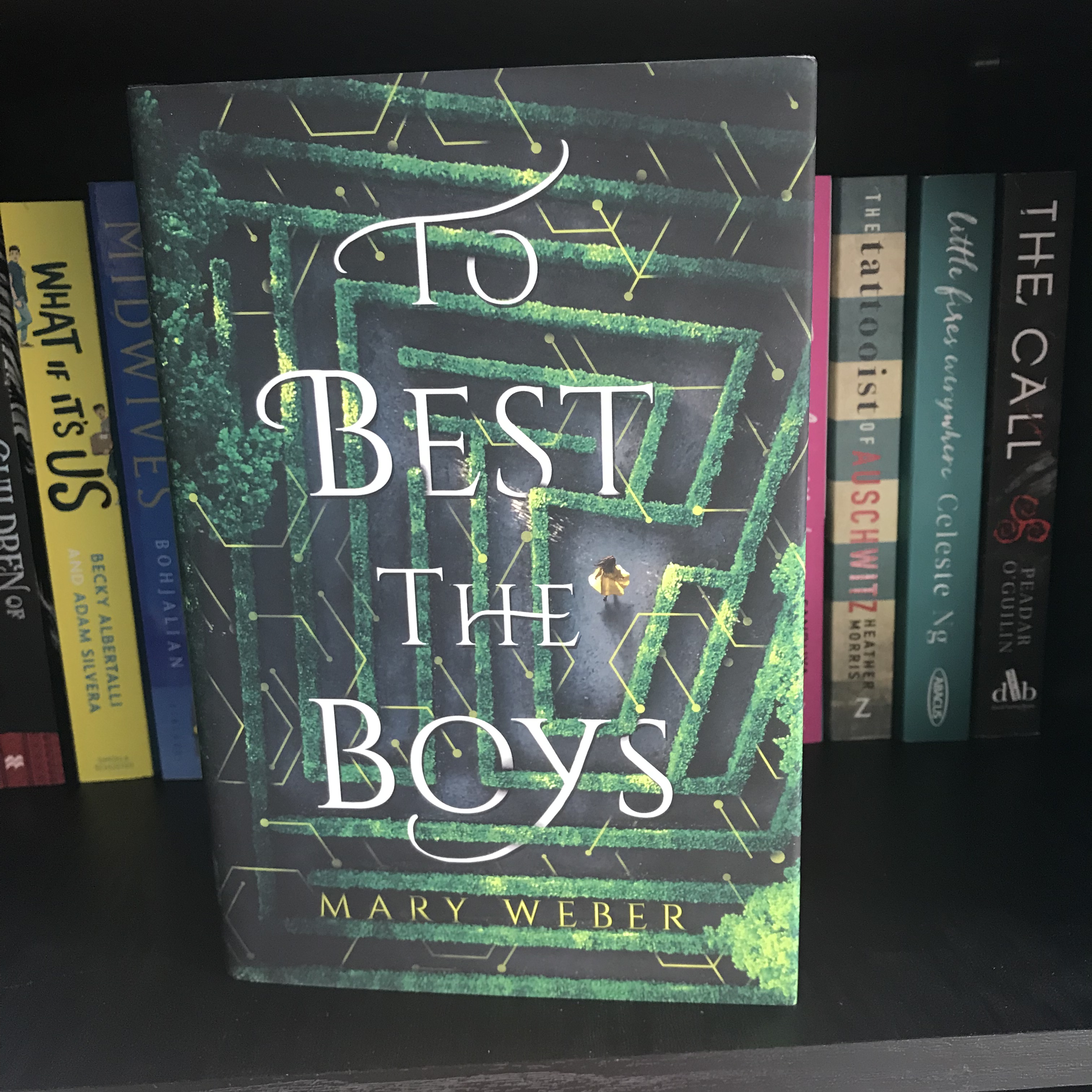 I got the chance to meet Kayleigh in person finally and this is also what YALC is about, meeting friends from online and being surrounded by other book lovers and book bloggers who understand what it is like to adore books and are more than happy to talk about books with you!

By Sunday I was exhausted and I was not up for the disrespect of other YALC goers. I won’t go into detail here but there were some really bad moments on Sunday and tehre is no need to for it at all. However, the positive is that YALC seemed to have learned from some of their mistakes on Saturday.

They still let us in early, causing a crowd yet again. This was a disaster as some people were shoving and pushing and being generally rude. It felt unsafe. Luckily Infintity Son was no longer being given out on a first come, first served basis and instead being done as a raffle. Virtual Queuing tickets was also managed in a much more organised way, with clear lines and spaces between the lines for different authors. Some atendees who were running were even told that they would not get tickets if they continued to run. This was really pleasing as what they were doing was unsafe and unfair.

I used Sunday as a much more relaxed day. I didn’t go to any signings or buy any books. I just wandered, looked after bags, read a bit and set up a Discord. I also did LOTS of chatting. I finally got to have an indepth conversation with Faye and got to spend more time with some of the UKYA Blogging Community.

Honestly these bloggers are the best community. I’ve admired so many for so long and I finally got to meet them which was SO exciting!

Very excitingly, I entered and won the raffle for a proof of Jennifer Mathieu’s book The Liars. I am a big fan of Moxie so I cannot wait to read this one!

Overall, I loved YALC. Whilst I have some real issues with the organisation (I will be emailing YALC), there is a real improvement in certain areas despite there still being a long way to go. I also have some issues for the community that I will address at some point, I just don’t feel this is the right time or place to do it.